The City Council’s new Broad Marsh car park – believed to be one of the greenest in the country – is set to open to motorists for the first time on Monday 1st November.

The state-of-the-art building is central to the council’s scheme to transform the southside of the city centre, with all of the surrounding streets undergoing huge changes to create an inviting new gateway to Nottingham.

Construction on the site got underway in July 2019 following the demolition of the old car park from September 2017, and continued despite the impact of the COVID-19 pandemic.

The car park features 81 electric vehicle charging points – the most in one location anywhere in the UK – and has 720 solar panels on its roof, expected to generate 190,000 KWh of electricity a year, enough to power the whole building. It is expected that this system will save over 53 tonnes of carbon in the first year of operation – the equivalent of driving a standard car almost 500,000 miles. 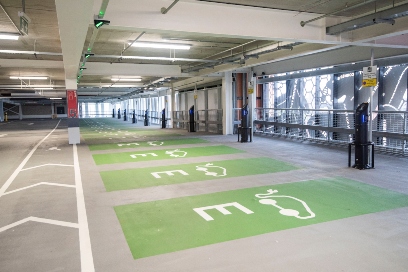 There are 1,200 car parking bays including dedicated accessible spaces, parent and child spaces, and 90 motorcycle parking bays, with a state-of-the-art Vehicle Management System to help parkers navigate to a space quickly and efficiently to reduce carbon emissions.

Customers will benefit from a light, airy environment – with a mix of natural and mechanical ventilation ensuring a circulation of clean air in the building – a taxi drop-off zone.

Safety and security has been prioritised with 24-hour CCTV monitoring, on-site guards and high quality lighting.

The bright and contemporary design of the building is a far cry from the one it replaced – deemed one of the ugliest in the city by many – with a combination of glazing and terracotta-coloured panels more in keeping with the new college building nearby than a multi-storey car park.

The car park is the first stage of a new development which also includes space for the new bus station, expected to open early in 2022, a new Central Library and retail units fronting onto Carrington Street.

Work is continuing in the previously traffic-dominated streets surrounding the building, to create a more pedestrian-friendly entrance to the city. Works near the new college and on Carrington Street are already starting to transform these areas, with extensive areas of new paving, amphitheatre seating and steps and soft landscaping underway. Through-traffic has been removed from Canal Street and Collin Street, with buses and taxis allowed access on Canal Street, along with cyclists on a new dedicated cycle lane, while works to create a large pedestrian space along Collin Street are planned to start early next year.

City Council Leader, Cllr David Mellen, said: “It’s really exciting to finally be ready to open the new Broad Marsh Car Park to drivers. It is a key part of the rejuvenation of the city’s Southside which is underway and already making a dramatic difference to the look and feel of this part of the city centre.

“I’m really pleased with all the green attributes this new facility can boast – a huge array of solar panels which will power the whole building and the most charging points in one location for electric vehicle drivers.

“I also think it looks fantastic and complements the new college nearby while being sympathetic to the heritage buildings on Carrington Street which have undergone some wonderful improvements of their own. I’m sure that as people return to the city in greater numbers they will be impressed with the new car park and the other improvements in the area.”

Deck the halls and trim the tree as it's all about Christmas!

Nottingham BID, the not-for-profit organisation that delivers a range of initiatives to support its membership of businesses and organisations in the retail, leisure, office, and education sectors...

What Your Venue Can Do to Help Tackle Spiking

The three winners in the Photography category of Nottingham's Young Creative Awards 2021 are about to get their work showcased in the windows of city centre businesses this October, thanks to...